Incredible: Only yesterday maraa and I celebrated the release of our simultaniously published book(lets), „The Megaphone Guerilla“ and „I Live Here“, and now I am – jet lagged – back in Berlin again. Number of copies is limited: 60.
While „Meg Gue“ is a graphic novel style documentation of our poetic performance walk on the 7th of October, „I Live Here“ gives a broader view of maraa’s eponymic creative lab and their work within the field of identity, localities and politics.
There is definitly more to say about both publications, as well as about the evening in general, as this was the final presentation of my work in Bangalore showcasing „Resounding Bangalore“ as a one-off performance for 3 radios, speakers and a handbag. As soon as I get the pics, there’ll be more to it.

Here come some screen shots. A pdf will be available online asap. Ms Schaffner is pleased to announce her final presentation as an outcome of her Goethian BangeloREsidendy: RESOUNDING BANGALORE (flyer design: Thara M. Thomas):

“Distance and locality are not just about geography. They define relations within a family (or culture) on multiple levels. They may or may not define identity. They may vary or move, they may travel or change by travelling. Much of my art is dedicated to the twin star system of (cultural) distance and difference and its pitfalls.”

„Resounding Bangalore“ is part of maraa’s creative lab “I Live Here” for which she has been invited to work with in cooperation with the Max Müller Bhavan Goethe Institut. Her zine publication “Megaphone Guerilla” documents on a poetic street happening also developed together with the maraa collective.

India Calling! Away in Autumn Ms Schaffner is happy to announce that she has been invited by Goethe Institute to work with the  fabulous Maraa Collective for Media and Art in Bangalore this autumn.

As much as I like the perfumes of rotting leaves,  frosty mornings and above all, of mushrooms under fir trees, I will swap this for neroli oil, radio waves and Bengaluru roses… and work with the Maraa collective of course. Hello India!

Residencia In Sonora in Madrid! I am most pleased and happy to announce that I am invited for a production residency at the Media Lab Prado in Madrid from 26th Feb. to 18th. of March 2018!
More radio gardening then… feeling very excited about it :) Radio straight from the plots: This 27th of June Berliner Runde will be hosted by Kate Donovan directly out of her garden in Berlin and Ms Schaffner will be her guest. Talk will be about gardening, art and radio and the prospect of a NEW Datscha Radio broadcasting in August. Colaboradio’s Garden Radio Day will start from 4pm and will not end before midnight… with guests and artists, possibly cats and definitly lots of sound on air! There will be more to it, so watch out and stay tuned.

22nd of May is the DAY OF THE IMPOSSIBLE! Just in case you didn’t know that….
Originally a quote by infamous musician and artist Sun Ra, Finnish media artist Kari Yli-Annala takes the impossibilities of existence as a reason to re-celebrate this anniversary live in the Colaboradio studio together with his cosmic friends and guests. There will be music, violins and of course, a bit of universal talk about art, media and other inspiring things. 16th of April found Faust’s poor Gretchen singing in the garden of the Willemer Häuschen in Frankfurt/Main: On occasion of Easter and Goethe’s famous „Easter Walk“ poem, the curators Annette Gloser and Robert Bock invited 11 artists to create art works along a historical parcours passing by Frankfurt’s Goethian landmarks. In an adaption of an old German „kitchen song“ the voices of Shanti Suki Osman and Ulrike Stoehring rang out from two birdboxes, each housing a different mono track for stereo listening.

And of course: those famous lines by J.W.G. in a 1836 translation by Edgar Alfred Bowring:

From the ice they are freed, the stream and brook,
By the Spring’s enlivening, lovely look;
The valley’s green with joys of hope;
The Winter old and weak ascends
Back to the rugged mountain slope….

From there, as he flees, he downward sends
An impotent shower of icy hail
Streaking over the verdant vale.
Ah! but the Sun will suffer no white,

Though in the landscape are no blossoms fair.
Instead it takes gay-decked humanity.

Now turn around and from this height,
Looking backward, townward see.

Forth from the cave-like, gloomy gate
Crowds a motley and swarming array.

Everyone suns himself gladly today.
The Risen Lord they celebrate,

For they themselves have now arisen
From lowly houses’ mustiness,
From handicraft’s and factory’s prison,
From the roof and gables that oppress,

From the bystreets’ crushing narrowness,
From the churches’ venerable night,
They are all brought out into light.
See, only see, how quickly the masses
Scatter through gardens and fields remote;
How down and across the river passes
So many a merry pleasure-boat.

And over-laden, almost sinking,
The last full wherry moves away.
From yonder hill’s far pathways blinking,
Flash to us colours of garments gay.

Contented, great and small shout joyfully:
“Here I am Man, here dare it to be!” On Air: Electric Fairy Grounds. On the 20th of April I had the pleasure of being invited to 3cr, Melbourne’s best known community radio station, to give a short talk on the current (until 30th of April!!!!) BCSC exhibition PHANTASMAGORIA and my work. Apart from my  site-specific radio play „Electric Fairy Grounds“ the talk also features excerpts of Geoff Robinson’s „Bell Walk“ around Lake Guy on the opening day, 8th of April. The interview was made by Leanne McLean. (Thank you !)

Here comes the link for the show; this post will get updated with lots of pictures of the station’s interior asap :)

A radio show on BCSC’s (Bogong Center for Sound Culture) exhibition and activities and an interviwe with Jaqui Shelton will follow some time later in Berlin, in May or June.

In the making III: Bogong Birdhouses Rosellas like to nest in those „bird boxes“, but this time they are not allowed in:  instead, a radio transmitter sits inside…
Upper one’s location is by the tennis courts, second one next to the „eerie“ tree, third one by the side of Junction Dam. 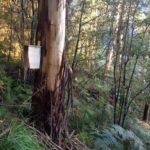 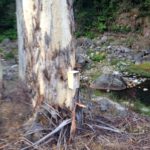 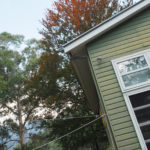 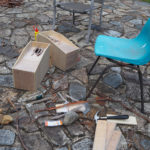 In the making II: Expatkids Save Radioplay Talin and Aarya Bennett are the star speakers in my newest of new radio pieces „Electric Fairy Grounds“. They will share their adventures – including encounters with the Moth King and a Fern Witch – with the visitors coming to  visit „PHANTASMAGORIA“ (7. – 30. April, Bogong, Victoria). The story will be told in three chapters and in three different places around Lake Guy. Get your walking boots ready and don’t forget to bring a mobile radio as the installation is ON AIR, 100 Mhz.

Dear Hema and Kate, thank you once again!